Floral Patterns are a four-piece screamo band from Portland, Oregon whose debut EP, The Time It Takes To Get From Place To Place And How People Change was released today. This four-track offering is an explosive breath of fresh air, blending the melodic aspects of emo and post-rock into their cathartic screamo foundation. Fans of bands such as Suis La Lune, Pianos Become The Teeth, State Faults, William Bonney, Old Gray and The Saddest Landscape will take an immediate interest in this. Without a doubt this is one of the best EP's I've heard this year, and an incredible start for a band sure to blow up in the near future.


The EP opens up with "Decay (Alone)", introducing interpolated film dialogue, giving the listener an immediate emotional crisis before the song has even kicked in. What follows are heavy octave-chords contrasted with clean, gentle arpeggios, while the vocals shout over each other, before descending into an instrumental over more dialogue. This track makes fantastic use of dynamics, with full breaks in momentum with just a single sustained chord before charging back in again. It finally closes out with a monumental crescendo that breaks into disarray, and after just one track I was hooked on this band.

"That Scene In Fight Club Where Edward Norton Looks In The Mirror And Sees Brad Pitt Instead Of Himself" introduces a screamier Listener-esque spoken word segment at the beginning, with a low bass rumble and atmospheric guitar work below it. This builds into one of the most melodic tracks, with the guitars taking a heavy post-rock influence, and the track building and crescendoing instead of following any linear structure. The vocals stand out with one hell of a passionate performance, making the song's 6-minute runtime feel like 6 seconds.

"Before I Self Destruct" features the most broken vocals on this entire EP, which are absolutely heart-wrenching. They are really the main feature on this track, with an incredible performance to boot. The instrumental plays fairly straight-forward, with a descending chord pattern and reverb-washed guitar tones that compliment the song's honest simplicity.

The closing track, "We Can't Stop Here, This Is Marlboro Country" brings back new film excerpts, before erupting into the heaviest Floral Patterns have been thus far. Eventually it falls into a nice bass/drum-lead instrumental break, with sparse guitar work, but heavy reverb shimmer. The screamed vocals pull back in, alternating lines between them. A single breath is given before they fly into a heavy heaven-ward outro crescendo.

You can listen to The Time It Takes To Get From Place To Place And How People Change in full on Bandcamp below. They also have some tour dates coming up with the also-incredible Reveries. More info on those shows can be found below. 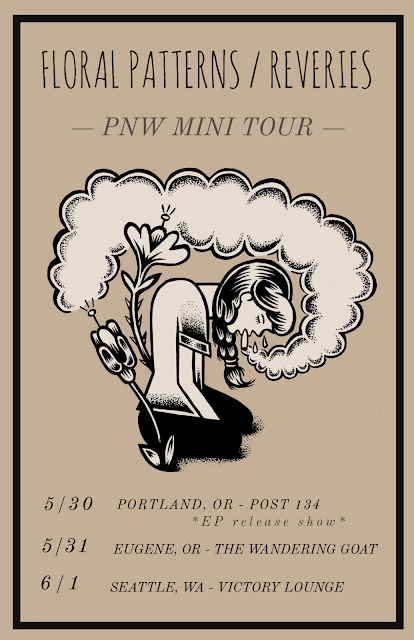 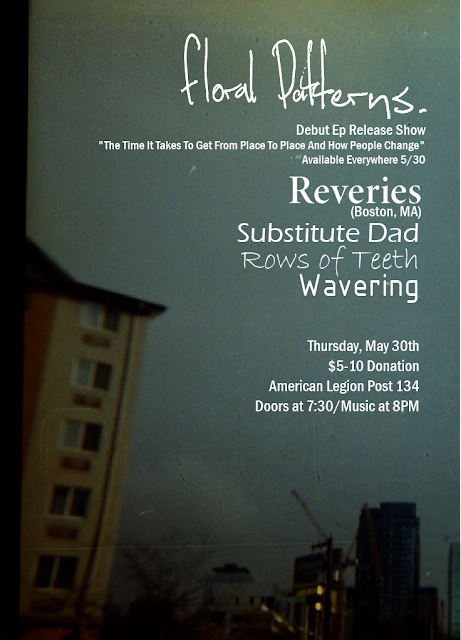 Very few bands in recent history have carved out a truly unique niche like Akron, Ohio's CityCop have. Since their inception in 2010, they have blended together a plethora of sounds and genres to create something that is completely their own. After a slew of solid releases, they are finally back with the follow-up to 2017's fantastic The Same Stories That Never Get Old with the five-track EP Nesh, which is out today on the newly-formed Little Elephant Records. 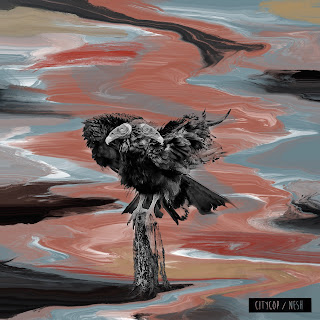 The title track opens the record up, with a flurry of intricate yet flowing rhythms, with their distinct acoustic guitar seamlessly switching between smooth jazz chords, arpeggios and furious noodling. Their forlorn vocals carve out melodic passages for the first half of the song, the kind that are just begging to be shouted along to. They pull in the heavy punches in the latter half, with a ton of hard-hitting syncopation, screamed vocals, and this harrowing bass tone that solidifies the emotional gut-punch. The band's blend of post-hardcore, math rock and emo influences mesh together in this duality of unique complexity and subtle familiarity, which is exactly what makes them stand out so much, and why this opener is a killer introduction to what's to follow.

"Get Well" is a brilliant tension-builder, starting off on a crescendo before falling in to an instrumental where every member is firing on all cylinders. The tightness through these passages is immensely impressive, and the vocals recall the best of Anthony Green's performances. The heavy acoustic strumming is heavenly, creating a harmonious space amidst the emotionally-driven chaos. The third track, "Hindsight" acts as an instrumental guitar interlude. It relies just as much on the space between notes as the notes themselves to provide a nice break and perfect segue into the next half of the album.

"2020" opens up with the guitar work duelling between melody and dissonance, before the whole band kicks in. The drum work flows effortlessly while the bass knocks out heavy hits of syncopation, providing a sinister tone to the choir of backing vocals. Speaking of vocals, one of the best things about this band/album are the shouts that break up the singing into a near-scream, but always pulling back before exploding full-throttle. This track exemplifies that fantastically, where the vocals assist in the rise-and-fall tension the instrumental emits.

Finally, to close it out we have "Flatline". This track is initially deceiving, because it sets itself up as the poppiest song here, and then immediately curbs that expectation with the most violent vocal eruption and first instance of blast beats on this entire record. We get the heaviest and most cathartic outburst to close off the album, with those earworm melodic vocals in the midst of the song to balance out the mix.

Overall, this could be CityCop's finest work to date (and that is saying a lot). Picking standout tracks is near-impossible, but if I absolutely had to, I would say "Nesh" and "Flatline" floored me the most, but every track offers something different yet equally solid. They're a band who continue to impress with a plethora of influences coming together to create one sound that can only be referred to as "CityCop". Nesh is available today from Little Elephant Records. You can check out the video for the lead single "Nesh" below, as well as pick up the 7".

The hardest working band in screamo business are back, with this marking their fifth full-length album, alongside nearly 30 splits in their 9 years of existence. Of course it is none other than Coma Regalia, who are releasing Vau Faelgoh on May 25th, via Middle-Man Records. They have been an absolute staple in modern screamo history, thanks to their relentlessly prolific release schedule, and close association with countless notable bands via splits/touring, as well as drummer/vocalist Shawn Decker's involvement in the equally-essential Middle-Man Records. They've made a name for themselves through their visceral and volatile playing, and heavy influence from a myriad of classic screamo acts, including Funeral Diner, Beau Navire and The Saddest Landscape. 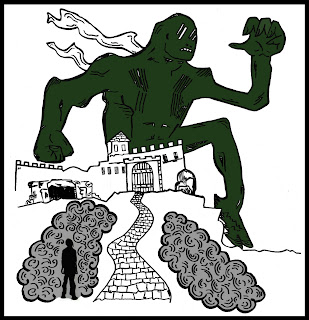 Vau Faelgoh reaffirms their already-cemented legacy as masters of their art. In these 11 tracks, the band drips with chaotic fervor, towing the line between hardcore aggression and melodic release. They utilize quick, dynamic changes to great effect, making these mostly 2-minute tracks sound like opuses. The desperate vocal delivery and cutting lead guitar lines recall the best tracks in The Saddest Landscape's catalogue, with songs like "Eaufell" being prime examples of this. The following track, "Aestheroh", features a pg.99-like build-up, which is just one of many homages to the sound they are torchbearers of.

"Kistleden" and "Tielasten" are standout tracks for their melodic, heartbreaking arpeggios, as well as some clean/screamed vocal layering on the former. Album closer "Daemeron" is everything I wanted out of this record and more. With vocals at the start sounding like a desperate rallying cry, and a gradual build-up amidst tremolo-picked octave chords, and those clean vocal harmonies looming in the background. It probably currently stands as my personal favourite track on the album (with some stiff competition, mind you), and ends this new record on a high note.

Coma Regalia are a must-listen in the modern screamo-sphere. Not only are they one of the most prolific acts to come out this decade, but one of the greatest at keeping this sound alive. Vau Faelgoh is a fantastic introduction if you have not heard them before (which, let's face it, you've definitely heard of this band through at least one of their splits already). The album is out on May 25th via Middle-Man Records. More information can be found below on release day.


Bandcamp
Storenvy
Facebook
Posted by Kevin at 19:21 No comments: 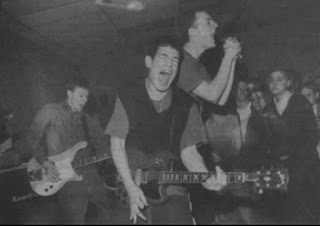 Frail were a five-piece straight edge hardcore/emo band from Philadelphia, Pennsylvania that were around from 1993 to 1996. They released three EP's and a split in their time, all of which were compiled in 2000 on Make Your Own Noise. Severely underrated but incredibly influential (on Saetia, to name one), Frail made a name for themselves as an "emocore" band in the truest sense. They took the metallic hardcore aggression of bands like Unbroken and infused it with the passionate screams and dissonant/melodic blend of bands like Portraits Of Past. Their limited output resulted in a virtually-perfect discography, which is an absolute must-listen for fans of screamo in its early stages. Members of Frail also later played in Ink & Dagger. Enjoy. 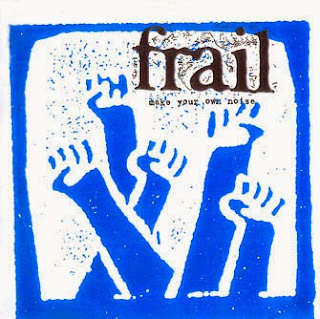 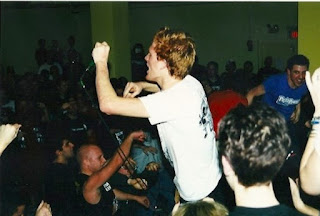 No Justice were a four-piece hardcore punk band from Washington, DC that were around from 1999 to 2000. During this time, they only released one 7", and it was near the latter end of their short-lived career. They are perhaps best known for their insane live shows, which a quick YouTube search will reveal just how crazy and reckless these shows (and particularly their lead singer) could get. I definitely suggest checking those out, but for now we have a surprisingly solid EP of youth crew-inspired hardcore. Some members also later played in 86 Mentality. Enjoy. 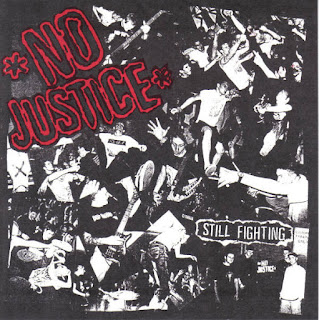 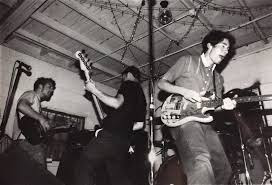 Ethel Meserve were a four-piece post-hardcore/emo band from State College, Pennsylvania that were around from either 1994 to 1998 or 1995 to 1997 (sources differ). They only released one full-length LP, 1997's The Milton Abandonment, along with two 7"'s and a split with the equally-underrated Giants Chair.  They also made a handful of compilation appearances, including the legendary (Don't Forget To) Breathe comp. All their non-LP tracks were compiled in 2000 on Spelling The Names.

Sonically, they took the aggressive, angular dissonance founded in the San Diego scene and blended it with the emerging lighter, more melodic midwestern emo sound (think Boys Life and Knapsack), along with sprawling song structures a la June of 44. Their output is small but sweet, and highly recommended. Enjoy. 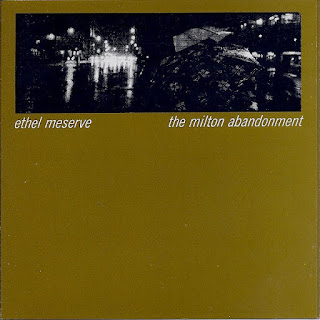 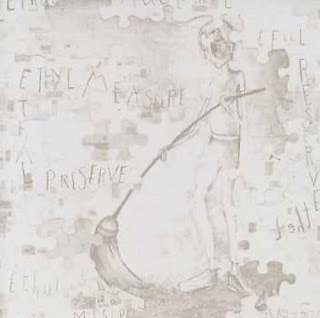