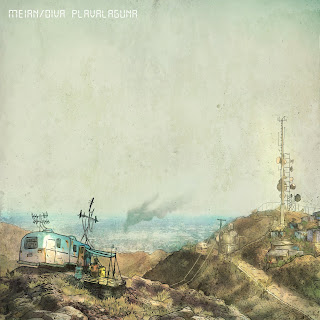 I'm happy to bring you two of the four new tracks off this new split from two incredible bands, Vancouver, Canada's Diva Plavalaguna and Morioka, Japan's MEIAN. The other half of this split is being premiered over at Open Mind / Saturated Brain. Check out one track from each band below, then head over to OMSB to hear the rest. The split pairs an eclectic, high octane synthcore band with a crisp, Japanese screamo band, which makes for an interesting and rewarding mix. This project has been a long time coming, with one band overcoming personal hardships and the other being birthed from the ashes of a previous project, but both bands are finally here. This entire split will be released digitally and on cassette through the always-fantastic Emo Cat Records tomorrow (Sept 14th), which will be linked below and active tomorrow. Enjoy.

MEIAN's track "Move On Up" opens up the split, and it hits the ground running with all instruments in play. They utilize very bright, glossy guitars that really shine in the mix, but never sound too polished. The guitars play with these incredibly melodic lead lines, and if it hasn't been made obvious, the tone of them is something to die for. It's the rhythm section that contrasts this melodic sheen with aggressive d-beats and tom hits to drive the song, along with some incredibly visceral and emotional screamed vocals. They close out with a unified post-hardcore influenced rhythm, which leaves a lasting impression in this track's wake. Sonic comparisons could be drawn somewhere between the bright, melodic aspects of Suis La Lune and the pummelling, commanding sound of Sans Visage, or something of the sort.

Diva Plavalaguna contains members of Emo Cat alumni Terrifying Girls' High School and Black Knight Satellite. They close out this split with fourth and final track, "Diva Protocol". They utilize triple vocals, pervasive weird synth lines, pounding drums and frenzied guitars that come together in an onslaught of noise. This track hits hard with a frantic yet calculated chaos. The vocals just topple over each other with these yelping screams, while the instrumental speedily rips through the first half of the track. It takes a sudden turn with a clean, tremolo-effect laden guitar, which builds into a full gang vocal chant as the song begins to crescendo. The buzzing synth, warbling bass, and vicious blast beats leave the track off in a sense of torment, with sharp guitars and devilish vocals howling to its end. This band's got a unique sound to say the least, and this track really hits out of left-field (in the best way possible).

On a side note, Diva Plavalaguna have launched a comic series titled "Diva! Digital Desert Duchess" in collaboration with illustrator Breanna McGowan. It follows the band as the protagonists in a post-apocalyptic future, with a storyline running adjacent to their musical releases. You can check that out here, along with Breanna's other work here.