Andrew Thomson - Live At Apt. 2B

This past January, Drew Thomson played a set at Blacktop Records HQ in Tillsonburg, Ontario. It's a small town about 45 minutes outside of London, which is where his band, Single Mothers, originated. Though perhaps better known for his phenomenally raucous main project, he's developed a name for himself with his softer, acoustic-based material. The intimate, personal storytelling and self-reflections are put at the forefront, and this new tape is a perfect example of that. This new live set includes songs from prior tapes put out by Secret Voice and No Sleep, as well as a series of self-released EP's. What sets Live At Apt. 2B apart is the live setting, with the funny between-song banter, the crowd singing on "Bad Catholics", and the intimacy of the recording that makes it sound as though the listener is in the room.

Live At Apt. 2B will be available on April 16th, 2016 through iTunes and Spotify, in addition to Bandcamp. It's being pressed on cassette and limited to 100 copies on transparent green tint, so I highly suggest grabbing a copy as early as possible. I know I don't normally do promotions like this, but I am sincerely a massive fan of his work, and his other tapes are already permanent residents in my glovebox, and this one will definitely be joining them soon. Plus it's a chance to give an independent Ontario (where I'm from) label some support, so definitely give their entire roster a listen. 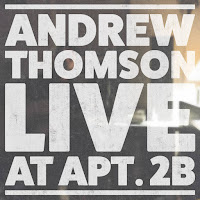