I suppose it's quite fitting that I follow my Rites of Spring post with one about One Last Wish.

One Last Wish formed in 1986, following the break-up of seminal punk band Rites of Spring due to the departure of bassist Michael Fellows. Remaining members Guy Picciotto, Brendan Canty, and Eddie Janney (who switched to playing bass, as well as contributing lead vocals on some songs) enlisted guitarist Michael Hampton (fomerly of Faith and Embrace) to create One Last Wish. They, like Rites of Spring, existed only briefly. They were active for only four months, and played six shows. The last thing they did before breaking up was record an album. However, since Dischord had been acquring a repuatation for released records by defunct bands, the album was shelved. This is with the exception of one song ("Burning in the Undertow"), which was released on the State Of The Union compilation in 1989. Fast forward ten years to 1999. The One Last wish album is finally put out as a co-release between Dischord and Picciotto's label Peterbilt, titled 1986.

One Last Wish's sound is a noticeable deperature from Rites of Spring's despite the two bands being so closely related (though nowhere near the change in sound that the third RoS incarnation, Happy Go Licky, would bring). First off, OLW are not nearly as chaotic, abrasive, or cathartic as RoS. They are more comparable to Embrace, who are often spoken within the same breath as Rites of Spring. They are also Michael Hampton's former band, which is quite evident in the guitar sound. One Last Wish, like Embrace, opted for a more clean sound as an alternative to the vicious noise of RoS. This is clear in the production quality, since both band's albums sound much more well-produced to the RoS LP (maybe that's not the greatest phrasing. The RoS album has a much more raw sound, whereas OLW's isn't, I suppose). This is with the exception of the All Through a Life EP, which is very indicative of where they were going, and an appropriate transition between the RoS LP and 1986. Anyway. One Last Wish, in addition to sounding cleaner and more or less abandoning the sloppy, raw, and visceral approach of Rites of Spring, created a different atmosphere. These songs sound much more positive and uplifting. This is not to say RoS were downers (see: "Remainder"), or that One Last Wish lacked an emotional punch. They just sound brighter. Picciotto's howls are less frequent and more controlled. The vocals are much more melodic and clearly sung. Janney also contributes vocals to two songs ("Friendship Is Far" and "Sleep Of The Stage"). His vocals are quite good, though I personally prefer Picciotto's.

Reading this over, I realize that I'm more or less comparing One Last Wish to Rites of Spring. I'd just like to clarify that they are their own band, and I love them as they are. They are essential for any fan of  the whole "Revolution Summer" movement or early "emo" bands (I already opened that can of worms in the RoS post). 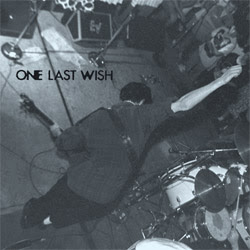